The Soundscape of the Venetian Terraferma in the Early Modern Era 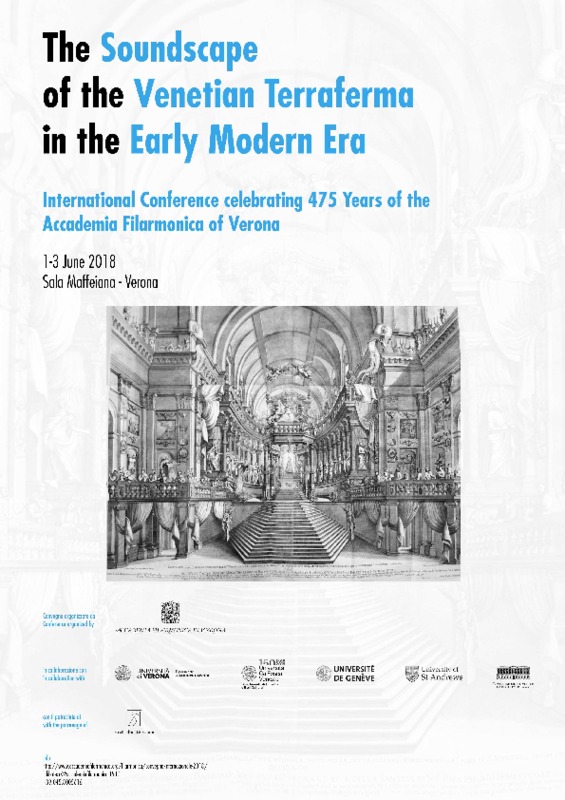 International Conference celebrating 475 Years of the Accademia Filarmonica of Verona


The Soundscape of the Venetian Terraferma in the Early Modern Era is an international conference organized by the Accademia Filarmonica of Verona on the occasion of the 475th anniversary of its foundation (23 May 1543), in collaboration with the University of Verona, Ca’ Foscari University of Venice, the University of St Andrews and the Conservatorio “E. F. Dall’Abaco” of Verona. Natural sequel to 'The Soundscape of Early Modern Venice' (Ca’ Foscari University of Venice, 24-27 May 2017 – vmo.unive.it/soundscape2017), this further initiative has the aim of increasing debate on the varied soundscape of the Venetian Terraferma in the early modern period. This territory, which stretched from Bergamo in the west to the Friulian Alps in the north-east and the river Po at the Republic’s southern extremity, formed one of the three subdivisions of the Serenissima; the others were the Dogado (Venice and surrounding area) and the Stato da mar (Venetian possessions in the eastern Adriatic and Mediterranean areas). The articulate system that regulates musical and non-musical sound in the Venetian territories prior to the fall of the Serenissima in 1797 is highly conducive to an interdisciplinary approach which draws on the new perspectives offered by urban history, humanistic geography and historical anthropology. Emblematic, in this sense, are the activities of the Accademia Filarmonica, which have dominated almost five centuries of local musical history.

Peer-reviewed contributions will be published in a dedicated volume, scheduled to appear in 2019.